My Tweets
Today we say goodbye to my Grandma, the inestimable Betty Pearson. Although its effects on my life have been quite tangible, the coronavirus remained quite abstract: something defined more by an absence of things than by a presence.  Sadly, my grandmother has joined the ranks of those taken down by this great absence.  Another absence that my family keenly feels right now is our own: her funeral this afternoon will be attended by my uncle and a few of my cousins, but my dad and the rest of my family are scattered across Canada and Europe. We cannot attend the ceremony in Scotland, since although our world has stopped for a moment, the pandemic outside just keeps on rolling.

But I hardly think that Grandma’s life should be upstaged by current events, so today I want to shine a light on this remarkable woman, the most resilient person I ever met. Grandma was a woman of incredible strength, courage, and love. Born in Scotland in 1925, she spent the better part of her teenage years in the Second World War, probably the sort of experience that makes you grow up too quickly.  After the war, she moved to Canada to start anew.

On the ship across the Atlantic, she met some folks who were on their way to visit some friends in Richmond Hill.  Grandma stayed in touch with them, and she was later introduced to the family whom her shipmates were staying with. She got wind that they were going bowling, and their son came to pick her up. “I thought he was alright! IMMEDIATELY! I’ll always remember. He was wearing a white v-neck sweater, and he was very kind.” This was Bun (Bernard), our Grandpa, a dashing young pilot.  By 1953, they were married, and had spent several years moving around the country as his job took him to different air bases.  It was in Alberta that my Dad appeared, and a few years later in Ontario, my Uncle Glenn.  During these years, Grandpa took many journeys across the high Arctic islands of Canada, as part of mission to map these remote northern territories.

Tragedy struck in 1961, when my Grandpa died in a helicopter crash in remote Labrador.  After that, she moved back to Scotland to raise her boys closer to her parents, first living in Largs, and then Glasgow.  In spite of such an immense personal loss, she brought up Dad and Glenn in a very loving home, something for which she will have my eternal gratitude. Under the sort of circumstances that would have easily derailed lesser souls, she persisted. Grandma went back to school to become a teacher, and eventually worked her way up to became headmistress of a school in Glasgow. In spite of the tragedy that they endured at a young age, her two boys did not just get by, they thrived, getting good educations and building successful careers for themselves. Most importantly, they built loving families of their own.  In all of these things, but especially the latter, Grandma was extremely proud of her boys.  The love and strength that she brought to the world in the face of great challenges was undoubtedly an important factor in them turning out so well.

She went from Mum to Grandma when I came along in 1989, followed shortly thereafter by my three cousins, my brother, and my sister.  Even though we grew up on the other side of the Atlantic from her, she always made the effort to get to know us and see us at least once a year, usually at Christmas.  She was always full of love and encouragement.  Also chocolate and books.

The latter was particularly important for me: at Christmas 1997, Grandma gave me a book that had been winning rave reviews in the UK, but had yet to make much of a splash in Canada.  Telling the wonderful story of a young wizard and his friends, this book proved to be a gift that would keep on giving, launching an obsession that would continue into – let’s face it – my 30s.  Harry Potter still brings me great joy, and has brought me closer to friends from around the world who share that same joy.  Thanks, Grandma.

In 2006, just before my final year of high school, I was privileged to spend the summer in Scotland, hiking in the highlands and hanging out with her in Glasgow. This was the start of getting to know her as more than just a child. She started to change in my eyes, becoming more than just the wonderful woman who appeared at Christmas to dispense excellent hugs and heaps of books.  I began to understand the incredible life she had lived, and how much that had shaped my family and my own life.

My relationship with Grandma began a new when I moved to Europe to start my master’s degree in 2014. I lost my other grandparents in 2008 and 2011, but unfortunately never really got to know them well as an adult.  I was determined to make the most of things and get to know Grandma.  Furthermore, after 2014, I was the nearest member of our immediate family, so I felt that seeing her was a small way of bringing us all closer together.  Glasgow is a cheap 1.5 hr flight from Amsterdam, so I made as many trips as I could, going once or twice a year since I moved out here.

During one of my busier semesters, I gave her a call to see if she wanted to chat.  “How about Tuesday? I have bridge club right now!” My then-90-year-old Grandma had a more exciting social life than I did, but that was pretty much par for the course – she was always the life of any party she attended.  At her local mall, the salespeople all knew her by name, famous for making her rounds with friends or the occasional grandchild in tow. Until well into her 90s, she possessed extraordinary reserves of energy, taking three flights of stairs every day to get up and down from her elevatorless apartment. I hope that I have that much get-up-and-go when I am that age.

Grandma was also elegant and full of class, always comporting herself with the utmost dignity when we went out. In spite of this demeanour, or maybe even partly because of it, she also had another side that gleefully embraced the ridiculous.  One Christmas morning, she waltzed (in a manner of speaking) down the stairs wearing a truly ostentatious Christmas sweater and pigtailed hat, looking like some sort of ludicrous viking elf.  She then proceeded to yodel, even though, I am sad to say, yodelling was not one of her many gifts.  Whenever we visited the Kelvingrove gallery in Glasgow, I always insisted that we visit the Elvis statue.  Grandma would unfailingly oblige me, joining in on the bizarre photoshoots I would instigate with her and The King.

What did we do together when I came up to Glasgow?  Truthfully, not much, but it never mattered.  We would often sit in front of the TV together, eating fish and chips, or getting up to date on the latest gossip about so-and-so’s husband from downstairs.  Determined that running up and down hills in Norway had made me too skinny, she also passed considerable time trying to convince me to put more butter on my toast. We always tried to get out of the house too, whether it was driving down the coast to Largs for a ludicrously extravagant ice cream (her favourite), rolling around Kelvingrove park, or just going for a spin around the mall.

Her apartment in Glasgow will always be one of my Happy Places.  The view from her window, the old trinkets on her shelves, and the creak of her floorboards are immensely calming.  Last year, Grandma moved into a retirement home, and even though she slowed down a lot, she always seemed to have more sparkle in her eyes than anyone else in there.  Grandma was always supportive and full of love, and I was happy that even as her memory started to fail, she still remembered me and enjoyed our time together.

In recent visits, she would often remark to me, with a mix of sadness and pride, “I’m a survivor”.  And she was!  She made it to 94, living a life full of love in spite of the immense challenges that she faced over the years. I will miss her immensely, but am comforted by all of the good memories and positive things, of which there are many.  I love you, Grandma. 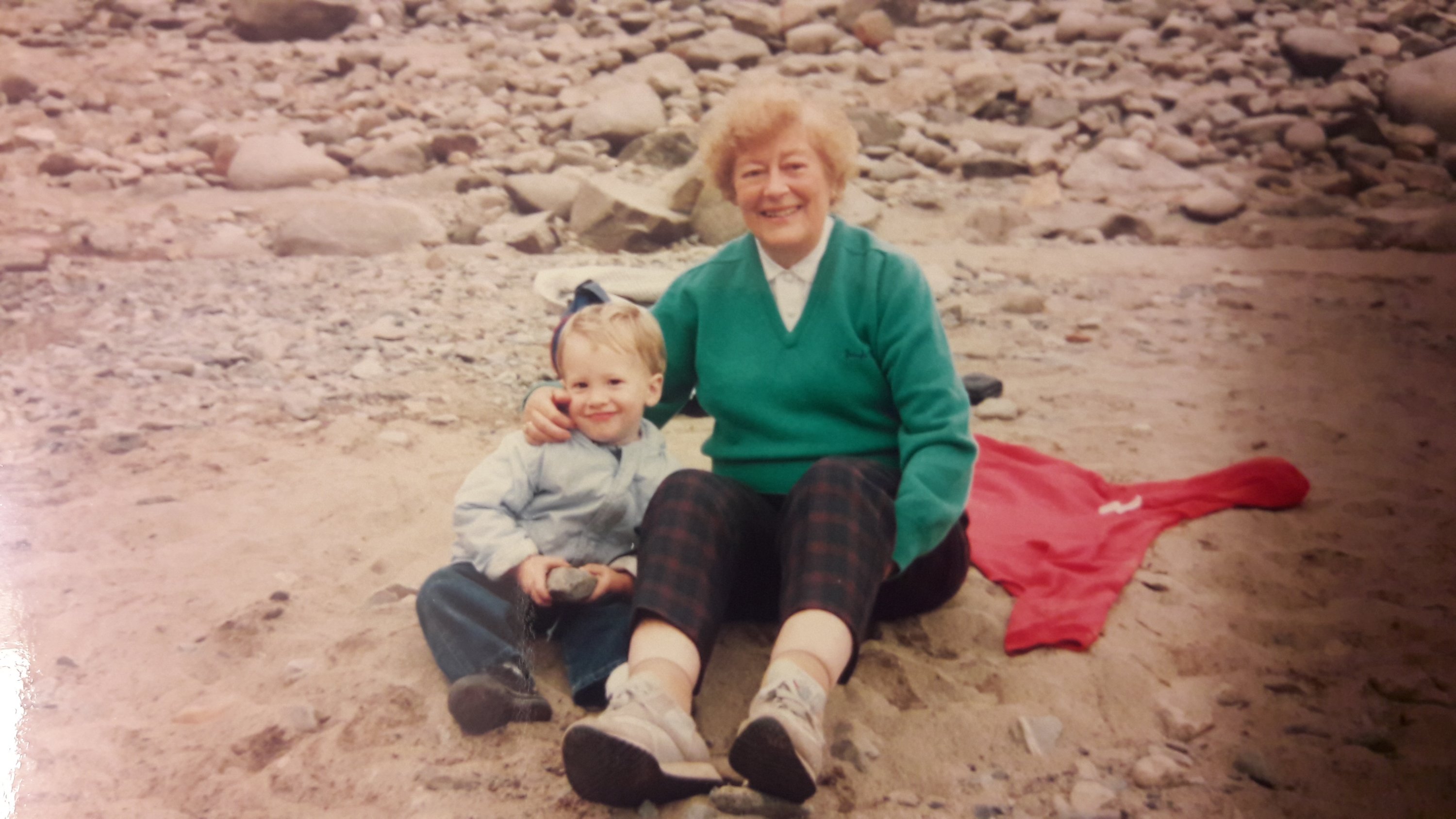 3 thoughts on “Betty the Resilient”